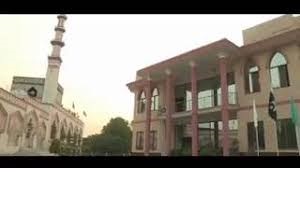 Shaykh Abu Adnan Muhammad Munir Qamar was born in 1954 in the village Rehan Cheemah near BhopalWala, which is in between Daskah and Samriyal (Pakistan). His father and grand father were all Ahl e Hadith.

Shaykh Munir Qamar passed his primary in the village of Gudhiala, which was next to Rehan Cheemah. He studied up to middle in Jamke Cheemah in St Mary’s High School which was a Christian private school. Shaykh Munir Qamar obtained excellent results in middle and was offered scholarship to carry on his studies, but he preferred instead studying religious studies and joined Jamiyah Salafiyah Faisalabad. His Christian teacher at St Mary’s High School asked him why he didn’t carry on governmental studies while he was offered a scholarship, but once Shaykh Munir Qamar told him that he wanted to join an Islamic Jami’ah as he was fond of Islamic studies, his Christian teacher understood and welcomed his decision.

He studied in Jamiyah Salafiyah Faisalabad and we count among his teachers there:

He also attended a one month Dawrah of the Quran of Shaykhul Quran Ghullamullah Khan in his Madrasah in Rawalpindi.

His journalism and writing during his studies

During his studies in Jamiyah Salafiyah Faisalabad, Shaykh Munir Qamar started his journalism and writing books:

a)  His first article was published in four parts in the weekly magazine “Ahl e Hadith” Lahore on the second page, while he was in the first year of Jamiyah.

b) He was recording the lessons of Tafsir after Fajr prayer of Shaykh Sultan Mahmood Jalalpuri when Shaykh Jalalpuri taught in Jamiyah salafiyah for a year, and he would write down the lessons from the recordings and send them to the weekly magazine “Ahl e Hadith Lahore” and these lessons would thus be printed in the form of articles.

c) From these lessons of Tafsir of Shaykh Sultan Mahmood Jalalpuri, Shaykh Munir Qamar gathered all the parts on Surah Al-Hujurat and completed the Tafsir of the last few verses left and sent it to a publisher to be printed in the form of a book. Unfortunately the publisher lost the copy and Shaykh Munir Qamar wrote it again from the different articles in magazines.

e) In the last year of Jamiyah, he had started with other students a monthly magazine and the annual number came in the month of Rabiul Awwal, so they decided to publish a special number on the Seerah of the Prophet (saw) in which many teachers and students wrote articles. This special number was after published in the form of a book “Ainah Nubuwwat”

His Da’wah Activities in Emirates and KSA

Shaykh Muhammad Munir Qamar after completing his studies had applied for different jobs and was accepted as Assistant Deputy Director of the University Board, but at the same time his brother in the Emirates obtained a visa for him. After consulting with his parents and friends, Shaykh Munir Qamar decided to go to the Emirates and applied for different jobs there and was accepted as employee of the Saudi Shar’i court in the Emirates.

Afterwards a Radio Channel in the Emirates started Urdu programs and the judge in the Shari’i court encouraged Shaykh Munir Qamar to deliver Urdu lectures there and referred him, hence Shaykh Munir Qamar started to deliver daily Islamic lectures which he delivered for 16 years. All his books were based on the notes he prepared for his lectures. His first series of talks on the radio, as it was the time of Hajj, was on the rites of Hajj and from these lectures, his book “Sue Haram” was published.

By doing regular lectures on the radio on the jurisprudence of prayer, he published in 3 large volumes his famous book “Fiqh Salah”, which was highly praised by his teacher Hafiz Thanaullah Madni. Hafiz Thanaullah Madni said that he had not seen a more detailed book on Fiqh As-Salah in any language.

With his lectures on the radio, Shaykh Munir Qamar would also deliver lectures in different Masajid on various topics.

Afterwards Shaykh Muhammad Munir Qamar went to Saudi Arabia where he worked for the same Shar’i court and the Shaykh is still residing in KSA in Khobar. Shaykh Munir Qamar also delivers lectures in different centres on various topics, Tawhid, Sunnah, Akhlaaq and others.

His writings and translations

6) “Masajid wa Maqabir or Maqamat Namaz”: 168 pages on mosques, forbiddance of establishing mosques on graves and other places of prayers.

7) “Durud Sharif”: 190 pages on virtues and ruling of sending Salah and Salam upon the Prophet (saw)

12) “Ameen”: a 104 pages book on the meaning, virtue and ruling of saying “Ameen” loudly behind the Imam.

13) “Jashan Milad Yawm e Wafat Par?”: 40 pages on questioning people whether they are celebrating Milad on the day of the Prophet’s death.

14) “Mard wa Zan ki Namaz mein Farq”: 46 pages book on the absence of difference between prayer of men and women.

16) “Surah Fatihah, Fazilat or Muqtadi ke lie Hukm”: A 251 pages on the virtues of Surah Fatihah and its ruling on the one who reads it behind the Imam

17) “Azmat e Quran”: on the greatness of the Quran

23) “Masnoon Zikr Ilahi” (Mukhtasar): The summarised version of the book has 50 pages on invocations in the Sunnah.

25) “Sharab or Digar Manshiyat”: 399 pages on alcohol and other intoxicants.

This book has also been translated into English.

30) “Da’wat ila Allah or Da’i ke Awsaf”: 96 pages and the call to Islam and attributes of the caller.

31) “Wujub Al-Amal bi Sunnah wa Kufr Munkir”: 96 pages on the authority of the Sunnah and Kufr of its rejecter

43) “Namaz Panchgana ki Rak’atein ma’a Namaz Witr wa Tahajjud”: 125 pages book on the number of Rak’at in the 5 prayers as well as Witr and Tahajjud.

45) “Namaz or Rozah ki Niyat”: 47 pages on the intention of prayer and fasting

49)” Mukafirat Zunub”: Summary and translation of a book of Hafiz ibn Hajar on actions that expiate sins.

52) “Topi ya Pagri ya Nange Sar Namaz”: A 40 pages book on wearing turban or having no hat in prayer.

58) Khutbat Haramayn: Translation of sermons of the Haramayn.

66) “Namaz mein Adm Pabandi or Tarik Namaz ka Hukm”: 156 pages on ruling on the one who abandons prayer.

70) “Masail wa Ahkam Azan wa Iqamat or Jamat or Imamat”: 159 pages on rulings of the call to prayer, Iqamaah, congregation and Imam

72) “Tawiz Gandon or Jinnat wa Jaddo ka Ilaj”: 86 pages on amulets and how to cure from magic

77) “Namaz Nabawwi”: translation of a book of Shaykh Munajjid with video.

78) “Sal e No or Tazkirah Chand Bid’at ka”: 57 pages on New Year and mention of some innovations.

82) “Namaz mein Hath, kab, kahan or Kese”: How to hold hands in different positions in the prayer.

92) “Haramayn Sharifayn”: The limits of the 2 Haram, their history and virtues

96) “Sahih Fadhail A’mal”: Authentic book on virtues of righteous actions, based on the Quran and the 2 Sahih.

111) “Mu’awizatayn, Fazail, Barakat, Tafsir”: his student Shahid Sattar wrote this book based on a lecture of Shaykh Nasir Rehmani and on the book “Tafsir Mu’awizatayn” of Hafiz ibn Al-Qayim. Shaykh Munir Qamar verified it and introduced it.

Source: Interview of Paigham TV and others