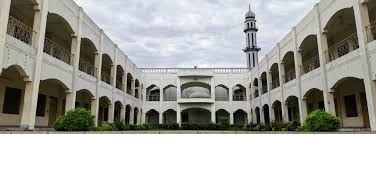 His ancestor Mian Hayat was a civil servant of the last Mughal leader Bahadur Shah Zafar in Delhi and he emigrated to a mountainous area in Hazarah after the fall of the last Mughal leader following the 1857 mutiny, as he feared being arrested by the British rule. His son Imamudin, the grand father of Shaykh AbdulHameed, joined the Jama’at of Muhajideen of Shah Isma’eel Dehlwi and Syed Ahmad Barailwi. Shaykh Imamdudin became a religious scholar in their company and Imamudin’s son AbdulHaq, the father of Shaykh AbdulHameed also was a religious scholar.

At this time Shaykh Muhammad Deen Mujahid, a student of Sufi Abdullah, was the Imam and Khateeb of the village. Sufi Abdullah was the founder of Dar Al-Ulum Odhanwala and Jamiyah Ta’lim Al-Islam in Mamun Kanjan. So Shaykh Abdul Hameed Hazarwi went to OdhanWala (in the suburb of Faisalabad) and joined the Dar Al-Ulum in 1944, and he joined the first class, he was behind the other students in Persian and Arabic, but with efforts he reached their level, rather went ahead of them.

Among his teachers there:

His teaching and students

Shaykh AbdulHameed Hazarwi studied for 6 years in OdhanWala and graduated there in 1950. Sufi Abdullah seeing his excellent qualities and knowledge appointed him as teacher of Dar Al-Ulum OdhanWala, and Shaykh Abdul Hameed taught there for a year and sought permission from Sufi Abdullah to return to Hazarah as he is more needed there. Hence Shaykh AbdulHameed Hazarwi started to teach in a Madrasah in the village of Jhangra but this Madrasah stopped after a year so he went to another village nearby Riyala where he taught in a Madrasah for 5 years.

The Shaykh started to teach in 1950 in Odhanwala and passed away in 2020, so he taught exactly 70 years during which he had a great number of students, we count among his preeminent students:

His knowledge and qualities

With his teaching Shaykh Abdul Hameed Hazarwi was also a great Mufti who was trained by Shaykh Isma’eel Salafi and Hafiz Muhammad Gondalwi, who when he was a young teacher, would verify his Fatawa, and Hafiz Gondalwi would sign them. In 1969, he had also started giving Khutbah in a Masjid in Gujranwala in which he continued the rest of his life.

Shaykh Abdul Hameed Hazarwi was a very compassionate and soft hearted teacher and the students would respect him immensely. He would pay a great attention at their studies and he would teach younger students of first classes as well as last year students to whom he would teach Sahih Al-Bukhari.

Shaykh AbdulHameed Hazarwi, an ocean of knowledge, passed away on the 9th May 2020, his funeral prayer was prayed in Jamiyah Muhammadiyah Gujranwala with a great crowd of scholars, students and laymen.

Note: Shaykh Abdul Hameed, who is Imam in Margate Kent, and Hafiz Shahid Mahmood (Umm-ul-Qura Publications) were also among the students of Hafiz Abdul Hameed Hazarwi.