You are here: Home / Our Publications / “A Gift to the Barailwis”, 2nd Edition

“A Gift to the Barailwis”, 2nd Edition 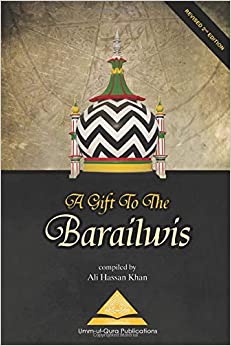 This book shows that the creed of the great classical scholars opposes the creed of Ahmad Raza Khan and other scholars of the Barailwi group on the topics of the knowledge of the Unseen and Barailwi claim that Prophets and saints are present and witness all matters of humans even their intimate lives, Barailwis asking the dead and seeking help from graves, their affirming powers to Prophets and saints above human nature and their claims that saints control the universe, and their belief in Wahdatul Wujood (unity of the existence) while the Salaf affirmed Allah’s essence being above His throne and distinct from the creation.As Barailwi scholars have put hatred in the hearts of their followers towards the Salafis and Ahl e Hadith, only quotes from classical books translated and published by Sufis themselves are present in this book, so Barailwi laymen cannot accuse Salafis and Ahl e Hadith of not translating properly and these quotes are translated by eminent western Sufis.Hence this book contains quotes from Hafiz As-Suyuti, Imam Al-Ghazali, Imam An-Nawawi, Qadhi ‘Iyad, Imam Al-Qurtubi, Shah Waliyullah Muhaddith Dehlwi, Allamah Ash-Shirazi, Allamah Al-Amidi, Allamah Ibn Al-Hajib, Allamah Al-Baydawi, Shaykh AbdulQadir Al-Jilani, Shaykh Shurunbulali, Shaykh Al-Qushayri, Hafiz ibn Hajar Al-Asqalani and other erudite scholars, as translated by Sufis themselves.In each chapter, first the creed of Barailwi scholars is presented and afterwards the creed of these great scholars, so laymen can compare and reflect! May Allah guide them and us to follow the path of our beloved Prophet (saw), the best of the creation, who fulfilled his mission, transmitted his message and left us on a clear path whose night is like its day.

The book is available for purchase on Amazon: