You are here: Home / Our Publications / “The reality of Ibn Arabi” with Fatawa of 200 Hundred scholars against ibn Arabi 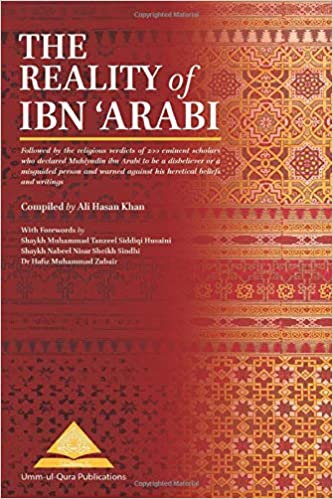 This book shows the heretical teachings of the famous Sufi Muhyiudin ibn Arabi At-Tai and the verdicts of 200 senior scholars who declared him to be a disbeliever or misguided person. The first part of the book presents the most scandalous beliefs of Ibn Arabi from his book Fusus Al-Hikam (inc. the pre-existence of the Soul, that worship of the calf and idols was worship of Allah, that Christians only erred by limiting divinity to Jesus, that all creeds are correct and the Gnostic should not restrict himself to one creed, that the Prophets take knowledge of the interior matters from the seal of the saints, that Pharaoh died upon faith, and other heretical beliefs). The quotes from Ibn Arabi are generally followed by famous commentaries of Fusus Al-Hikam byAl-Jandi, Al-Qaysari, Al-Qashani, Al-Jami and Al-Nabulsi. Afterwards some extracts of the book of Mulla Ali Al-Qari Al-Hanafi entitled Ibtal Al-Qawl bi Wahdatil Wujud wa Naqd Fusus Ibn Arabi (Obliteration of the creed of the unity of existence and nullification of Ibn ‘Arabi’s Fusus) are mentioned refuting sternly Ibn Arabi and exposing his disbelief and deviation from the truth.The second part of the book mentions the verdicts of 200 scholars who condemned Ibn Arabi and his creed of Wahdatul Wujud (unity of the existence). These quotes are taken from the book Ibn Arabi wa Mawqif Al-Ulama Al-Muslimin minhu by Shaikh Daghash Al-Ajmi. Shaykh Ajmi took most of these quotes from the book Al-Qawl Al-Munbi byHafiz As-Sakhawi and Tanbih Al-Ghabi by Hafiz Al-Biqa’i, and many other famous books gathering the verdicts of the scholars against Ibn Arabi. One can see from these verdicts that the scholars who condemned Ibn Arabi came from the four famous schools of jurisprudence, and these scholars were the leading Shafii, Malik, Hanafi and Hanbali scholars of their times; it was not only Athari scholars who declared Ibn Arabi to be a disbeliever but also the leading Ashari and Maturidi scholars. We count thus among the major scholars who condemned Ibn Arabi: Ibn Al-Jawzi, Al-‘Izz ibn AbdisSalam, Ibn Daqeeq Al-Eed, Abu Hayyan Al-Andalusi, Ibn Taymiyah, Adh-Dhahabi, Taqiyudin As-Subki, Al-Bulqini, ibn Hajar Al-Asqalani, Ibn Al-Khayat, As-Sakhawi, Al-Biqa’i, Al-Iraqee, Badrudin Al-Ayni, Ibn Katheer, Ibn Al-Muqri, Al-Ahdal, Taqiyudin Al-Fasi, Sa’d At-Taftazani, Alaudin Bukhari, Mulla Ali Al-Qari and many others.

The book is available on Amazon: