You are here: Home / Biographies / Biography of Shaykh AbdulHameed Kashmiri 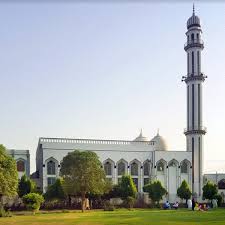 Shaykh AbdulHameed ibn Muhammad Akbar was born in 1970 in Panah Dhanwan which is in the surroundings of Kotli Azad Kashmir (Pakistan). He studied first at home from his father and read the Quran from his mother.

After completing his studies, Shaykh AbdulHameed Kashmiri started to teach literature and Fazil Arabic to students in Jamiyah Azeemiyah Salafiyah in Chatarpari Mirpur Azad Kashmir. He taught in this Jamiyah for 3 years and afterwards taught in Chanar Public school.

In Azad Kashmir as the number of Ahl e Hadith is little, he used to give the call to Tawheed with great wisdom. He would have excellent relations with students of colleges and would meet general public in a good manner, trying to call them to the pure Tawheed and Sunnah.

While he was working in Jami Masjid Ahl e Hadith D1, Hajji AbdurRazaq requested him to come and teach in England, so Shaykh AbdulHameed moved to the UK in 2002, and since he has been Imam in many Masajid in UK.

In England, Shaykh AbdulHameed Kashmiri completed an English language course in Cambridge University and he was given the award of student of the year, which was given by the principal of Woking College.

Shaykh AbdulHameed Kashmiri has also been a pro-active scholar, he participated in the rally against the Iraq war and he is a close friend of Hafiz Ibtisam Elahi Zaheer. Shaykh AbdulHameed writes a lot online and shares articles and posts raising awareness at the plights of Muslims in Kashmir and elsewhere. May Allah Ta’ala preserve him and give him Tawfeeq to carry on his mission of promoting the Book and the Sunnah.