You are here: Home / Our Publications / “The Conflicts between the Companions and the Position of the Pious Predecessors regarding them” by Shaykh Irshad Al-Haqq Athari 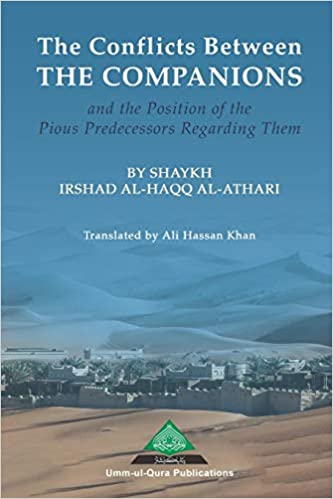 It is extremely regrettable that some people calling themselves Ahlus Sunnah wal Jama’ah are, in some of their research, trying to degrade the Companions and, by mentioning their disputes and conflicts, they want to reduce their importance. Indeed they are trying continuously and actively to portray the efforts of the Companions as not solely for the sake of Islam but they claim that their efforts were based on personal benefit or liking and they were fighting like people desirous of the throne and kingship (may Allah protect us from such beliefs!)In contrast to this, all of Ahlus Sunnah are in agreement on the fact that the decision on the internal matters and disputes between the Companions is not a matter of history but a matter of creed, and despite these conflicts they are honourable, truthful and a people who desired guidance for the community. This is the position of all the pious predecessors. The scholars who authored books on creed gave in them a great emphasis on this and we will have the pleasure to present their detailed statements to the readers of this book.Excerpt from the Author’s Introduction

The book is available on all Amazon platform: https://www.amazon.co.uk/CONFLICTS-COMPANIONS-POSITION-PREDECESSORS-REGARDING/dp/B08M7YVLGV/ref=sr_1_1?dchild=1&qid=1610616540&refinements=p_27%3AAli+Hassan+Khan&s=books&sr=1-1&text=Ali+Hassan+Khan