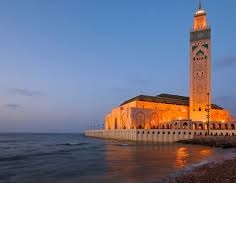 Shaykh Abul Kalam Azad was born on 17 August 1888 in Makkah. In 1898 he returned to India and his mother passed away on the same year. He launched the same year the monthly magazine “Narang Khayal” in Calcutta.

He married in 1901 (at age of 13), and in January 1901, he launched the weekly magazine “Al-Misbah” and with it he also became the director of “Risalah Muhammadiyah” Kanpur.

In April 1906, he became again director of “Wakeel Amritsar” and left it in November 1906 and returned to Calcutta.

In 1909, he traveled to western Asia and France.

On the 13th July 1912, he launched the weekly magazine “Al-Hilal”. This magazine was forced to give guarantee of 2000 rupees after an article regarding the incident of Masjid Kanpur. In 1914, after an article, their guarantee was taken and a new guarantee of 10 000 Rupees was asked but they could not pay it, hence the magazine ended with its last number on 6 November 1914.

On the 8 March 1916, the government of Bengal exiled him from the province and he went to Ranchi (Bihar). In April 1916, “Al-Balagh” was terminated.

The government of Ranchi imprisoned him. In 1919, his book “Tazkirah” was published, followed by the book “Jami Ash-Shawahid fi Dukhul Ghayr al-Muslim fil Masajid”. He was released from jail on the 1st January 1920.

On the 28-29 February 1920, he presided the Bengal provincial Khilafat Conference and his Khutbah Sadarat was on topic: “Masalah Khilafat wa Jazeeratul Arab”

On 13 September 1921, he became the supervisor of the weekly magazine “Pegham e Aap”. Its editor was Shaykh AbdurRazaq Muleehabadi.

On 10 December 1921, he was imprisoned for a year and he spent his sentence on Alipur Jail. He made an historical speech in this trial which was published afterwards in the form of a book called “Qawl Faisal”.

He was released from jail on 6 January 1922 and on the first April 1923, he launched the every 15 days magazine “Al-Jamiah” (Arabic) and Shaykh AbdurRazaq Muleehabadi was its editor.

In 1930, he became the Qaim Maqam president of All India National Congress. He was imprisoned on 21 August 1930 and released in January 1931. In September 1931, he published the first volume of his Tafsir “Tarjuman Al-Qur’an”.

In 1940, he was elected as the president of All India National Congress and remained continuously president of it up to 1946.

In 1941 he was sentenced for 2 years and was imprisoned in Ninital Jail, and was released in December 1941. On 9 August 1943, he was arrested and imprisoned in fort AhmadNagar. On 19 April 1943, his wife Zulekha Begum passed away.

On 26 June 1946, he participated to the Shimla Conference (in which Gandhi, Qaid e A’zam Muhammad Ali Jinnah and British viceroy Field Marshal Wavell were there with other leaders of Congress and Muslim League to disucss independence) and at the beginning of 1946, his writings “Ghubar Khatir” and “Karwan e Khayal” were published.

On the 15 January 1947, he was appointed as the education minister of the transitional Indian government after independence.

On the 14 January 1951, he was elected deputy leader of the Parliamentary party (of Congress). He went to the Unesco conference in Paris on 18 May 1951, and afterwards went to London, Rome, Iran and Karachi were he visited as well the grave of Qaid e A’zam Muhammad Ali Jinnah.

He was elected in the first general elections of India in February 1952 from constituency of Lok Sabha, and he was appointed as minister of education, natural resources and science and technology.

He was reelected in March 1957 elections, and given ministries of education and science and technology.

On the 15 February 1958, he gave his final speech on “Anjuman Taraqi Urdu Hind” conference in Delhi.

Dr Abu Sulaiman Shah Jahanpuri wrote: “He was opposed to the creation of Pakistan, he did not consider the scheme of Pakistan as a correct solution for the 90 millions of Muslims, but when national agreement was reached (for Pakistan) then he stopped opposing it…He never asked for Pakistan to be terminated, or weakened, or creating hurdles in its progress, or creating problems in it, rather he was wishing for Pakistan Istihkam, growth of democracy, good relations between its classes and sects, and good relations with India, rather he displayed excellent efforts for it” (“Athar Nuqush” p 29)

Allamah Iqbal said: “Abul Kalam is an Imam and a Mujtahid”

Shaykh Sayid Mawdudi said: “Molana Azad’s greatest particularity is that his opponents would throw insults at him but he would not insult anyone. He was very much a Shareef An-Nafs and individual of bright natural disposition”

Shayky Ameen Ahsan Islahi said: “Molana Abul Kalam Azad was an Imam and a Mujtahid. His brain was made after assembling many thousands of brains”